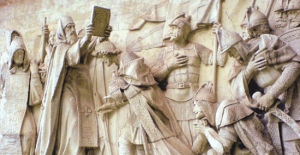 Graduate students opting for the concentration in Christian Traditions for the Ph.D. in Religious Studies are expected to work closely with their adviser to design a program that exhibits both breadth of study of the Christian tradition and depth of specialization in a particular historical period. The requisite breadth and depth can be obtained through a mix of core seminars in aspects of the Christian tradition and upper division undergraduate courses with additional graduate-level requirements. The specific mix of seminars and upper division courses will be determined in consultation with the adviser based on the student’s interests and previous preparation, but in any case should include at least one doctoral seminar in Christianity in a temporal period other than that of the student’s specialization.

The student is normally expected to acquire a general foundation in the history of Christianity as a global tradition and the history of Christian thought at the M.A. level either through M.A. work done elsewhere or through enrollment in upper division courses offered in Religious Studies and History at UCSB. The upper division courses recommended for undergraduate majors specializing in Christian Traditions are highly recommended for graduate students as well (i.e. History 114 A-B-C or RS 127 A-B-C; RS 151 A-B).

*Students interested in focusing on Christianity in East Asia or South Asia should discuss their interests with faculty in the area to determine if there are sufficient resources for doing so, given the student’s background and previous preparation.

Students will be expected to gain a high degree of fluency in the language(s) of the area of focus, in addition to the departmental requirements in French and German.

The student is also expected to acquire competence in at least one non-Christian religion found in the area of focus, for example, Judaism, Islam, Buddhism, or an indigenous tradition. This can be accomplished through additional seminars, directed reading, a field exam focus, and/or enrollment in upper division courses.

Note that it is also possible for a graduate student to make Christianity a central focus while working in one of the other concentrations within Religious Studies, for example, Mediterranean and West Asian Religions, Religion in America, Native American Religion, and, with appropriate preparation, East Asia or South Asia. It is also possible to combine the study of Christianity with a doctoral emphasis in Global Studies, European Medieval Studies, Women’s Studies, or Translation Studies.