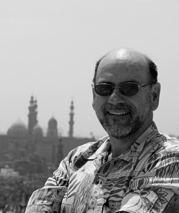 Juan Campo is an Associate Professor of Religious Studies at the University of California in Santa Barbara.