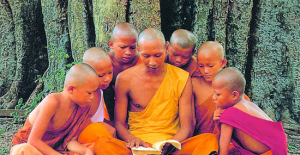 Graduate students opting for the Buddhist Studies concentration for the Ph.D. in Religious Studies will, in addition to the Department 200 series, be expected to complete at least five Buddhist Studies core seminars covering at least two cultural regions, including three in their principle area of focus.

The student is also expected to acquire competence in one or more of the non-Buddhist religions found in the area of focus, for example: Hinduism, Jainism, Daoism, Confucianism, or Shinto. This can be accomplished through additional seminars, directed reading, a field exam focus, and/or enrollment in upper division courses.

Students will normally spend at least one academic year in their region of focus: India, Thailand, Tibet, China or Japan.

Note that it is also possible for a graduate student to make Buddhist Studies a central focus while working in one of the other concentrations within Religious Studies, for example, South Asian Religions or Philosophy of Religion.

Students with minimal or no language skills appropriate to the Asian area in which they plan to focus their graduate study of Buddhism are urged to acquire an Asian language focused  M.A. either at UCSB or elsewhere before entering the Buddhist Studies PhD concentration.  At UCSB this can be accomplished either in the Department of Religious Studies or in the Department of East Asian Languages and Cultures, depending on the language required.